I bought my wife a Sodastream for Christmas, and when I saw it sitting on the counter next to our pod coffee machine (a Lavazza A Modo Mio), I had an idea…

So this morning I gave the concept of fizzy coffee a go.

I’d initially thought about putting soda-water through the coffee machine but I thought there’s a reasonable chance that this could destroy the machine and possibly my marriage, so I’ve gone for the less exciting approach of mixing the drinks after production.

I used tap water with maximum gasification (4 burps from the sodastream), and one shot (~100ml) of coffee made with an “Intensamente” pod (the red-top ones), which are described as follows:

The magic of this great blend captures all of your senses in a moment of complete excellence. Great body, well rounded and a richness of roasted aromas produces an exceptionally full flavoured coffee. It is an authentic blend for savouring all the intensity of a Café Bar experience.

Due to impatience I started with hot coffee, pouring it into an equal volume of soda water in a tall glass.

First of all this produced a mess – a massive head of brown foam, plus a fair bit of coffee on the counter-top since our espresso cups aren’t really designed for pouring.

With a bit of stirring the bubbles cleared and I was able to pour in the rest of the coffee and top it up with soda water, so probably ending up at a ratio of water to coffee of ~1.5:1.

A bit more stirring and it looked like this: 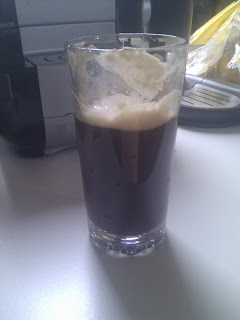 Not great to be honest – the very strong soda taste overwhelms the coffee flavour.
Also as evident from the amount of foam it’s lost most of it’s fizz.
And the frothy head has a slight weird-brown-foam-on-the-beach association to me.
And it’s luke-warm.

Overall not completely undrinkable, but not nice, 1 out of 5.

I think part of the problem here was that I used hot coffee. Warming the soda-water will have reduced the solubility of CO2, leaving the result un-fizzy and producing the massive head in the process. Yeah, science.

I did think that this might happen beforehand, which is why I went for maximum fizziness in the water, but the side-effect of this is the overwhelming soda-water flavour, which kills the coffee.

If I try this again, I’ll use cold coffee, as suggested, and less fizzy soda-water.